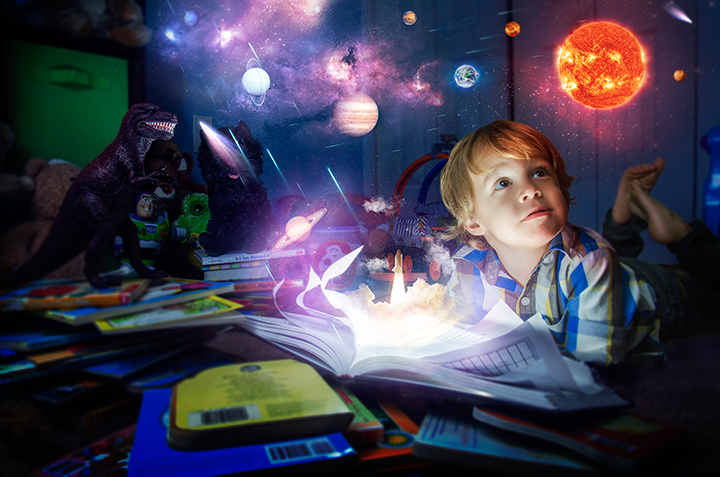 13 Dec Imagination. Something From Nothing!

Posted at 11:59h in Lifestyle by ud_admin 0 Comments
0 Likes

We’re not exactly sure of this fuzzy line between consciousness and unconsciousness, living the real life and dreaming. We aren’t sure which part that we are playing.

There’s some mystical part of our brain that sees things which doesn’t exist, put them into positions and move them around and gives us pictures. What is that? As per Quantum Physics, Particles can be in a superstate. It’s a state of moving and a still at the same time. What does that even mean? An idea that you look at something and as you look you change the behavior of it. The observer actually changes the actual atoms that are moving. What? How’s that possible?

We’re not sure that this is the only Universe that we are living. They believe inside every galaxy, there is super massive black hole and inside every super massive black hole there is another universe with hundreds and billions of galaxies each with the black hole at the center. We don’t know the very nature of the universe, whole idea that you can dream, you can Imagine. I think this all things can be someone’s Imagination, your imagination, my imagination or may be combination of everyone’s Imagination. All the photographs that we haven’t experienced but we can see. Whole map of universe might be all real. But that’s just what we see right now. It might be infinite and complicated and crazy, may be we can’t see it. Its limited by our ability to think outside what we have seen.

Imagination is the real force behind revolution. Imagination is the workshop of the mind. It is where the impulse, the desire, is given shape, form and action through the aid of the imaginative faculty of mind. Think about inventors and their inventions: The Wright Brothers and the plane. Thomas Edison and the light bulb. Alexander Graham Bell and the telephone. The only way anything has ever been invented or created is because one person saw a picture in his mind. Its all was originated in their mind. These were men who had utter faith in the invisible and who knew the power within them to leverage the universe and bring the invention into the visible.

When you imagine an idea, you imagine a product, for example you imagine how to design an engine of a car and when your imaginations has an idea of this thing, and then you build it and design it. And Boooom! Its there. But there was no thought of that before. You created this or it came to you. There is something from nothing. What is that from? What is the root of the signal. But all of them originate in imagination initially, all of that have to be thought of. All of that have to be created by human minds.

Imagination is something we are not taking as seriously as we should be. I think your mind doesn’t just control things, you bring things out of infinite, out of your imagination, you bring them and manifest them in the real world. You have incredible power. Like idea of placebo effect. I give you a sugar pill and you thought I gave you a medicine and you feel better. So what’s happening? This is direct co-relation between positive thoughts energy and positive results in the physical forms, they are connected.

We tend to give our all attention to physical and material world and its all done though our senses. Lets give our attentions for a while to non physical world. Lets go to the root cause of everything we see around us and its our mind.

As we take a look at mind’s higher faculties, imagination, intuition, the will. These are phenomenal tools and used properly they will give us virtually anything.

“Imagination is everything. It is the preview of life’s coming attractions.” – Albert Einstein