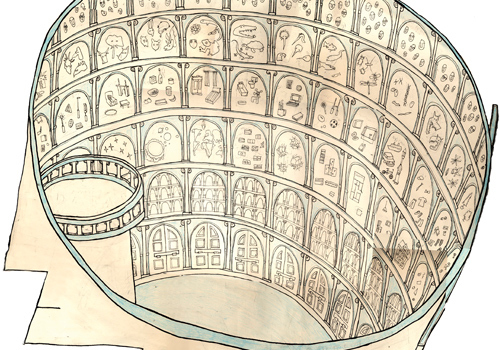 13 Nov The Memory Palace. You Can Not Possibly Forget It!

Posted at 11:58h in Lifestyle by ud_admin 0 Comments
0 Likes

The most amazing thing to me is Human Brain! It is 1 kg lump of gray matter and yet it is a network of 1000 billion interacting Neurons. One of the great things we all have in a brain is that we can store memories. Human Brain is incredible at remembering things. Think about buildings you have ever been in. Your school, your office, your home, your friend’s home, shopping mall where you have been only once. Close your eyes and you can literally sit there right now and take a Mental Walk through the building. And you never once tried to remember it. It was all done subconsciously. So there are enumerable things that we are very good at remembering. Primarily we are very good at remembering Spatial Locations. What I mean by spatial is that it is 3-Dimensional.

Many years before modern era people did not have computers or cell phones or calendars. They did not even have ability to write down. They had to memorize stories and pass the stories down. How did people remember those things? So there was a time when it was very important to remember things. But now as technology emerged and people began to write down and use mobile phones and computers to store information rather than memorize that. This ability to remember slowly flared over time.

Is it really the best thing that we have created such a world where we do not need to use our brain at all to remember things? I do not think so.

There are situations where you need to commit something to memory. Little kids are very good at visualizing things and using imagination. For some reason as we get older our imagination start kind of deteriorate. Lol! The way society is gets us into position where having a silly imagination is no longer acceptable. But it can be very useful with memory.

The Memory Palace is probably the most powerful technique to memorize information and it is really fun. A lot of memory contest champions claim to use it.

Dominic O’Brien, eight times World Memory Champion. He has an entry in the Guinness Book of Records for his feat of committing to memorize a random sequence of 2808 playing cards (54 packs) after looking at each card only once. He was able to correctly recite their order.
Are you kidding me? Whoa! Hats Off!

This is one of the oldest known memory strategy dates back to 500BC invented by Greek poet Simonides of Ceos.

Though it is pretty ancient method, there is a lot of research in the field of Neuroscience that shows How and Why this memory technique works so well. There is a part of out brain called the Hippocampus. It is the core of the Neuro Memory System and so it is basically a place where we store our memory, our spatial memory, Hippocampus has ability to navigate and recollect different memories and to even imagine future experiences. Here is a quote from that study:

The spatial learning strategy they were referring to was The Memory Palace. They were calling it a Method of Loci in study. Loci comes from the Latin word which means Location. The basic idea Neuroscience was able to confirm was our brains are really good at remembering things Visually and Spatially. The Memory Palace system takes advantage of both. Your Visual Memory and your ability to look at things Spatially. Powerful memories are Strongly Visual.

So here is what we will need to create The Memory Palace,
1. Familiar place
2. Vivid imagination.

For example you wanted to remember grocery list which has below four items,
1. Eggs
2. Bread
3. Soda
4. Dog food

First, Choose your Memory Palace. It can be your gym, garden, office, home, school, palace or even your own body or commute you use. You can just close your eyes and you can see yourself mentally moving through that building. You can pretty much see the art on the wall, desks, chairs, etc. It does not have to be perfect, but more detailed is better.

Third, Fill each part with information you want to remember.

Fourth, Connect each part with story. Connecting each part is absolutely critical.

Lets see what happens with this grocery list. So if I would use my house as memory palace. I would sit and imagine and visualize myself opening a front and I would see eggs splattered everywhere. I would not see just a container of eggs. As if some jerk came over to house and just smashed eggs everywhere over the floor. And that is why it will be powerful memory because it is strongly visual and also I imagined that I could smell it. Yuk! So you want to make it as vivid as possible. Now next part is you want to remember to pickup Bread. So I remember that I could not pass the hallway without slipping on eggs and I had to grab this gigantic loaf of Bread. And trick here is the loaf of bread is absolutely massive. That would be vivid and you can smell the bread. Then you remember that you could not get pass the bread and you could not get in the kitchen without eating your way through the hole in the Bread. Now you make it as obscure and as abstract as possible, something you can not possibly forget. Then you remember after eating all that bread you were so thirsty and luckily there was a giant bottle of Soda in kitchen and you drank that to your heart’s content. Then you turned toward bedroom and there was a giant Blood Thirsty Dog. So may be this dog does not like you very much and it was growling at you.

So now this is that memory palace divided in small chunks, filled with information and each part is connected. Now I can simply see that right now, opening the front door, saw the cracked eggs, I had to eat through giant piece of bread, then I was so thirsty, then I was so busy drinking soda that I did not see the Blood Thirsty Dog coming from bedroom.

And trust me you will never forget my this grocery list, even after weeks if I ask you, you will be able to recall it exactly the same way you imagined now.

You are gonna need more than a one palace. There are memory experts who are competing and they have 100s and even 1000s of memory palaces for different different memories. You can use locations within locations (in living room: couch, chair, window, TV, etc.)

PRACTICE! Try using memory palace system to remember information once a day for two weeks. Once you get the hang of it you will notice that you get to situation where you gotta remember something now you have a tool called The Memory Palace. You know how to use it. Try it to see how effective it is.

Really this method has nothing to do with your intelligence. It all has to do with converting it. I can remember egg, bread, soda, dog food but it is much easier to remember it as a story and even easier to picture that in my head.